“Sitting still is our workplace, sometimes our battlefield.”  That’s a quote from Pico Iyer, and I was asked to respond to it any way I wanted.  Here’s what came out:

I envy cormorants. I live on a houseboat — a shack on a raft, floating on a lake just north of downtown Seattle — and watch them from my office window as they hunt for fish. And I play a kind of one-sided game with them, trying to predict when they’ll dive.

They’re not like cats. There’s no staring fixedly at a succulent piece of prey. No tensed, quivering muscles crouched in preparation for the pounce. Cormorants are craftier than that. They feign absolute indifference.

They’re so still that I don’t even see them appear. I look up from the keyboard and there one is, settled in the water as though it’s always been there and I just never happened to notice before. It’s not looking around; in fact it’s not moving at all. I look closely, waiting for a sign. Anything that could tell me it’s spotted prey. But no, nothing.

I know that at some point, at some split second, it’ll dive, but try as I might, I can never predict exactly when. There’s not so much as a twitch, not even a barely detectable swivel of the curved neck or shiver of the feathers. Not the slightest sign. Yet one moment it’s there, and then faster than I can blink, it’s gone: an elegant head-first dive, as fluid as the water itself, so quick that I’m never quite sure if I actually saw it or just re-created it in my mind. There’s hardly even a ripple to indicate where it went under.

I wait, holding my breath as I search the water, trying to predict when and where it’ll surface. I never succeed. A radius of forty feet, maybe, and some thirty seconds at a time — that’s as close as I can get. I focus on one spot, convinced that this time I have it, only for something to register in my peripheral vision and see it already surfaced, a fish in its beak. A quick upward toss of the head and the fish is gone. And then once more, that calm, almost eerily patient stillness, and me at my desk, watching, as still as the bird.

And then comes the dive with no surface that I can see. The cormorant’s moved on. The water seems oddly empty, and I feel very alone.

I wrote that maybe a month ago, and have only just realized that I haven’t seen a single cormorant since then… 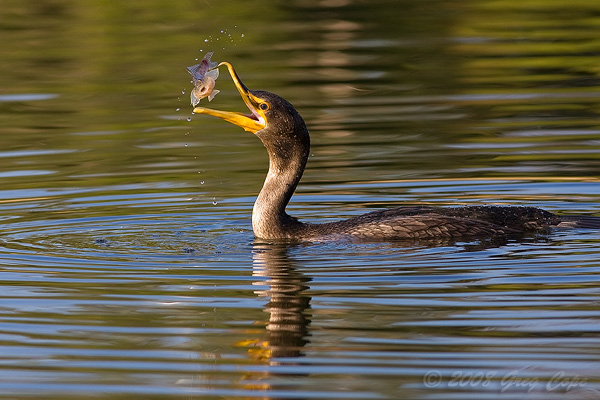