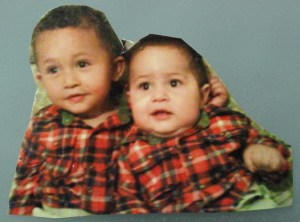 I call them my niños, though of course they’re not  mine.  In fact I’ve never met them.  But their photo sits by my desk, a reminder of everything we don’t see when we indulge in the luxury of being tourists.

Writers are lousy at taking vacations.  The eye never stops seeing, the mind absorbing, the words forming.   So when a friend all but dragged me to Rio Caliente two years ago, I was amazed at how easily I adapted.  A spa so low-key that the word hardly applies, it’s an hour northwest of Guadalajara, 5000 feet up in the hills where water comes boiling out of the volcanic rock, the ground is strewn with chunks of onyx, and the Mexican sunlight is Middle Easternly pure and clear.  So I went back last year as a guest speaker, leading a small writing workshop.  And that’s when I found the niños.

Two of us had taken off to explore down the river gorge.  We’d frolicked in the falls (the only word for it, ‘frolicking’ – laughter bubbling up from deep inside as the water tossed us this way and that), dried off on the rocks, re-booted (as in the pre-computer sense of putting boots back on), and begun following an animal track through the scrub up against the steep hillside.   Since we weren’t as lithe as whatever animals had made this track, we found ourselves at a dead end – a small semi-spherical cave scooped out by a winter waterfall.   On the floor of the cave were the remains of a fire.  And in the ashes, a charred make-up compact, and a lipstick.

I bent down, sifted through the ashes, and came up with a half-burned clump from someone’s wallet.  I could make out a credit card and a woman’s driver’s license almost fused together, sandwiching a brightly colored Virgin of Guadalupe holy card.  And then I saw the photo, set with clear deliberateness off to the side, away from the fire.

We looked, but found nothing else – no clothing, no signs of  a struggle.  Just the photo and the charred remains.  And a strong feeling that we needed to get out of there, back into the sunshine.

I scooped what I could into my daypack.  Back at Rio, Igor – yes, he’s Mexican – took his time when I laid it all out on the old wooden counter that serves as the ‘front desk,’ and merely raised his eyebrows when I suggested maybe calling the police.  Finally, he shook his head.  “Looks like a robbery,” he said.  “No point in reporting it.”  And he made as though to sweep everything into a waste basket.

I didn’t argue, though I couldn’t see why a thief would bother to make a fire.  Easier to just toss everything into the undergrowth, where it would never have seen the light of day.   But I couldn’t let the niños be thrown into the trash.  Someone had lovingly cut out that photo.  Someone else had carefully set it apart from the fire – someone with no qualms about burning a holy card but clear qualms about burning the photo, as though by doing so, he or she would harm the two boys. 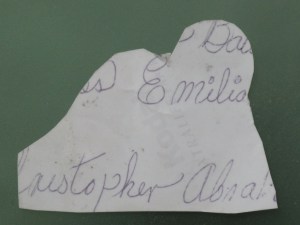 So the niños came home with me.  Over the next few months, friends examined both sides of the photo — to the right is what’s written on the back — and were divided on whether it was a plain robbery or something more sinister.   It was only when a Mexican friend came round and heard the story that I finally found the word that made sense of it all.   “You know,” he said gently, “Santeria is quite strong in that part of Mexico.”

I write about the niños now because I’ll be back at Rio Caliente for the last two weeks of November.  Sans phone, sans computer, sans anything electronic.  Just books, a spiral notepad, hiking boots, and a swimsuit.  And the sharpened awareness that I’m just another gringo tourist, frolicking in the deep waters of other people’s lives.

A couple of days after I posted this, a friend who was there wrote the following in an email:

“A beautiful and haunting post.  Reading it, I thought of yet another, alternate narrative:  Perhaps one of the niños (the older, protective one, perhaps?) was also the arsonist, who, in hoping to singe the remnants of his past, found that as much as he wanted to forget the woman, his life with her, her departure (possibly with, shall we say, the younger, wide-eyed niño, who may have also mysteriously gone missing), could not smolder his love for his brother, what they shared, all that made him who he is.  As if he feared, by setting fire to that picture, he, too, may have gone up in flames.  Instead, the niños, glossy-coated, resilient brothers they are, could remain, like Benjamin’s angel of history, forever looking into the ashes of the past, piling up, the winds of the fire blowing them unchanged into a floating, uncertain future.