A girl can get really tired of writing about burqas, so I’d sworn I’d give it a rest.  But this is just so nuts I had to break my vow: 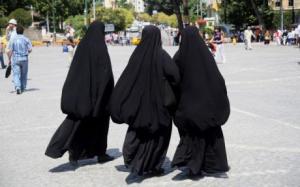 The first time I saw this photo, some months ago, I knew it had to be a hoax.  You know, one of those photoshop deals.  Besides, it could be anywhere, right?   Nothing to indicate that it was, as claimed, in the Israeli town of Beit Shemesh, and that these women weren’t ultra-conservative Muslims but ultra-Orthodox Jews.

Still, who could resist such a delicious idea?  Clearly not that grande dame of British journalism, The Daily Telegraph, which today ran the same photo with an accompanying story from its Israel correspondent:

At the insistence of the husbands of some burqa-wearing women, a leading rabbinical authority is to issue an edict declaring burqa-wearing a sexual fetish that is as promiscuous as wearing too little.

“A sexual fetish?”  Interesting.  “As promiscuous as wearing too little?”  Have the venerable rabbis been reading The Accidental Theologist?  My previous post on Sluts and Veils?

If I needed any further confirmation that The Telegraph had really taken a bath on this story, it was right there in the by-line:

That is, dated nine months ago.  QED!  Hoax!  Suckers!

Except then the reporter in me stood up on its hind legs and said “Hold on a moment:  double check.”  So I did.  And I’m truly sorry I did.

Because the only mistake in the whole Telegraph story is the date of that by-line.

Yes, Veronica, there is indeed a new ultra-Orthodox Jewish sect in Israel in which women wear burqas (with full-face veils — not even a slit for the eyes).  Apparently they even shower in them, so that they never lay eyes on their own bodies and thus, presumably, avoid the devilish temptations of auto-eroticism.

Once again, extremism trumps faith.  It really is a religion all its own, and its fanatical adherents the real co-religionists.

With which, I hereby renew the Accidental Theologist ban on burqas.

This time, I hope it lasts…