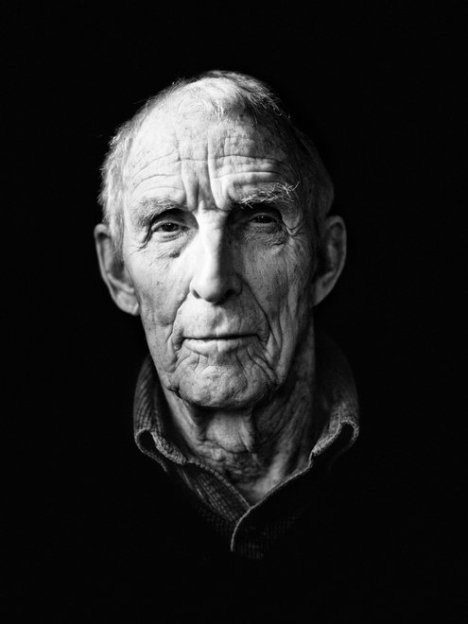 My copy of Peter Matthiessen’s The Snow Leopard bears the marks of a well-used life, much like the photo of him in today’s New York Times. The cover is torn and tattered, the linen boards worn and faded, the pages yellowing at the edges. The end pages are full of scribbled notes to myself, the text scored and marked in the margins. This is a much-read book.

I’ve placed it high on the reading list of every writing course I’ve ever taught, tracing the intertwining of its parallel journeys: on the one hand, into the hidden inner sanctum of Dolpo on the Tibetan plateau, in search of the elusive snow leopard; on the other, into the mystical and equally elusive peacefulness of Zen Buddhism.

There were far more than two hands, of course, which is why I read the book so many times and never tired of it, entranced by the intense lyricism of its descriptions of landscape, and the sharp contrast with the pared-down writing about Zen practice.

I have most of Matthiessen’s other books too, both fiction and nonfiction, but this is the one I keep coming back to (in a way I suspect would have deeply disappointed him — no writer cares to be defined by one book above all the others).

I didn’t know much ‘about’ him other than what he revealed in his writing, which was carefully calibrated. I had no idea he worked a naively youthful two years for the CIA, for example, using the Paris Review as a cover, though I did know he’d become a Zen priest, that he was fiercely involved with environmental issues, and that he was… well, not exactly good-husband material. No matter: the writer was more important to me than the man.

Yet much as I love and admire his writing, I haven’t ordered my own copy of his last book, a novel called In Paradise. Instead, it’s waiting for me at the library as I write.  And has been waiting a few days. I delay picking it up because even though it’s Matthiessen, something in me doesn’t want to read it. It’s set at a meditation retreat at the concentration camps of Birkenau and Auschwitz, and the very idea of such a retreat seems, at least to me, a horribly ironic oxymoron. Which may indeed turn out to be his point. I’ll find out soon enough.

Matthiessen died yesterday, at age 86. “I don’t want to cling too hard to life,” he’d said, and by not doing so, I suspect he arrived again at the place he described in this quote from The Tree Where Man Was Born, which serves as the ending of the extraordinarily timed piece on him in today’s NYT magazine. Here it is:

“Lying back against these ancient rocks of Africa, I am content. The great stillness in these landscapes that once made me restless seeps into me day by day, and with it the unreasonable feeling that I have found what I was searching for without having discovered what it was.”

What is this if not pure Zen?

What a bunch of hypocrites they are at the Anti-Defamation League.   The up-front bigotry of the Dove World Church in Florida, whose redneck pastor has declared September 11 “Burn a Quran Day,” is almost refreshing by comparison.  At least he’s not trying to hide beneath a  veil of sensitivity, and he sure as hell isn’t trying to kid anyone that he’s into anything like civil rights.

The ADL has the astounding chutzpah to describe itself as “the nation’s premier civil rights agency,” declaring that it “fights anti-Semitism and all forms of bigotry, defends democratic ideals, and protects civil rights for us all.”

So yesterday it issued a statement against Cordoba House, the proposed Muslim community center whose opponents have deliberately and misleadingly dubbed it “the mosque at Ground Zero.”   (It’s not a mosque, and it’s not “at Ground Zero,” but two blocks away.)   In fact check out the Cordoba House website and you’ll see that it’s a perfect example of what Jewish tradition calls tikkun olam, repairing the world –- dedicated to interfaith communicaton in the spirit of the convivencia, the “Golden Age” of Muslim and Jewish intellectual achievement in Spain that came to a crashing end with the Catholic Inquisition and the expulsion of both Muslims and Jews.

Of course the ADL has no objection to the idea of a such a center.  My God, no.  That would be so intolerant.  Instead, yesterday’s statement concluded with this:

Proponents of the Islamic Center may have every right to build at this site, and may even have chosen the site to send a positive message about Islam. The bigotry some have expressed in attacking them is unfair, and wrong. But ultimately this is not a question of rights, but a question of what is right. In our judgment, building an Islamic Center in the shadow of the World Trade Center will cause some victims more pain – unnecessarily – and that is not right.

You see?  Others are bigots, but the ADL is not.  It’s demonstrating its exquisite sensitivity to pain – not its own, of course, but that of the families of those who died on 9/11,  some of whom (presumably not the Muslims among them) find the idea of Cordoba House “offensive” and are,  per ADL director Abe Foxman, entitled to their bigotry because – I wish I was making this up – 9/11 is the equivalent of the Holocaust.

Asked why the opposition of the families was so pivotal in the decision, Mr. Foxman, a Holocaust survivor, said they were entitled to their emotions.

“Survivors of the Holocaust are entitled to feelings that are irrational,” he said. Referring to the loved ones of Sept. 11 victims, he said, “Their anguish entitles them to positions that others would categorize as irrational or bigoted.”

Wow.  So the Holocaust is now a defense for bigotry?  Howzat for new-speak?  George Orwell, kindly rise up from your grave.

Not that this is the first time the ADL has used the Holocaust in such a way.  Witness its support of the so-called Museum of Tolerance  to be built on top of a thousand-year-old Muslim cemetery in Jerusalem as a wing of the Simon Wiesenthal Center.  The Wiesenthal Center is headed by  the oleaginous right-wing rabbi Marvin Hier, who pooh-poohed the idea first that Muslims care about their dead and then that there were even any bodies buried there.  There certainly aren’t any more:  as the Israeli newspaper Ha’aretz discovered, Hier hired a contractor to swiftly and clandestinely “remove nuisances in the area of the project” – the “nuisances” being hundreds of skeletons, bones, and skulls.

So in ADL-think, the Jerusalem project is just fine – they’re Muslim bones, not Jewish ones, and besides, it’s all about “tolerance.”   But when someone else proposes a far more meaningful project and that someone else is – gevalt! – Muslim, that’s going beyond the pale .

Listen, Abe Foxman:   if you want to lead an organization of bigots, at least have the intellectual honesty of that dumb-ass pastor in Florida.

Meanwhile, the least you can do is this:  DELETE ALL REFERENCE ON YOUR WEBSITE TO THE ADL AS A CIVIL-RIGHTS ORGANIZATION.  IMMEDIATELY.  Just who do you think you’re kidding?