I’m bucking the “now” imperative and running a forty-year-old photo that was tucked away in the sports pages of today’s NYT.   I’m running it because when I saw it, I just sat there gazing at it over my first coffee of the morning and knew that I’d begun the day right. 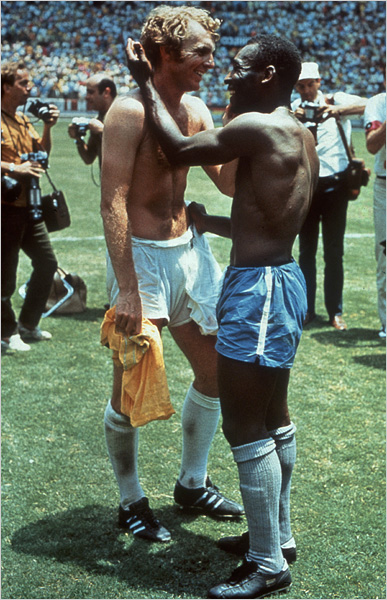 I think it was Arthur Koestler who once fantasized that sports could bring nations together — an idea that became laughable with the rise of soccer hooliganism and the mad flag-draped patriotism and medal-counting of the modern Olympics.  But this was one shining moment when who won and who lost was irrelevant.

Forty years ago, it was the black/white thing that people focused on when they saw this photo.  Now, in 2010, some will probably focus on a perceived homoerotic quality.  But here’s the thing:  Forty years from now, in 2050, this will still be a moving photo, no matter what socio-political concerns of the time people bring to it.

What we see here is the art of living — the art of two people at the height of their powers, in full mutual respect, admiration, and friendship.

(You can read the excellent story behind the photo — on the photographer John Varley, who died last week —  here.)