I wish I could say that Egyptian President Mohamed Morsi’s anti-Semitism surprised me half as much as it seemed to surprise The New York Times.  (“Egyptians should nurse our children and grandchildren on hatred” for Jews and Zionists, Morsi declared in a videotaped speech three years ago. “They have been fanning the flames of civil strife wherever they were throughout history. They are hostile by nature.”)

But the rampant use of anti-Semitic imagery in political rhetoric both in Egypt and in other Muslim countries (“apes,” “pigs,” “bloodsuckers,” said Morsi) is hardly news.  It comes right out of the convoluted paranoia of The Protocols of the Elders of the Zion, which far too many Egyptians still take for fact instead of the fictional fake it was long ago proved to be.  What concerns me is how it seeps into even the best-intentioned minds, in far less obvious but nonetheless insidious ways.

Consider, for instance, an exchange like this one, which I seem to have had a number of times over the past several years:

— “What do the Jews think they’re doing in Gaza?”

— “So why do you not say ‘the Israeli government’ instead of ‘the Jews’?”

This is what you might call the low-level shadow of anti-Semitism.  My interlocutors (I love/hate that word) would never dream of using Morsi’s inflammatory language of hatred.  They’re liberal and moderate American Muslims (some are believing mosque-goers, others self-described agnostics or atheists).  And yet even they are not always immune to that conflation of politics and ethnicity, of Israeli policy and Jewishness.

Each time such an exchange occurs, there’s a pause in the conversation — a moment of discomfort as my interlocutor (that word again!) realizes what I’m responding to.  And then comes a nod of acknowledgement, one that takes considerable courage, since none of us appreciate being called to account.  Call it a small moment of sanity.

I recognize this because it’s mirrored in Israel, where talk of “the Arabs” — a generalization as bad as “the Jews” — veers more and more not just into outright racism, but into a kind of gleeful pride in that racism, as shown in David Remnick’s long piece on “Israel’s new religious right” in the current New Yorker.

Israeli politicians have taken to presenting themselves as defenders of “the Jewish people,” regularly using “Jew” as a synonym for “Israeli,” even though — or because — over 20% of Israeli citizens are Muslim or Christian Arabs.  They do this deliberately, of course, just as the Morsi-type anti-Semitic rhetoric is deliberate.  The emotional resonance of “Jew” is deeper and far older than that of “Israeli,” and thus far more useful as a carrier of both covert and overt pride and prejudice.

As a Jew I find this political claim to represent me both insulting and obnoxious.  Like an increasing number of American Jews, I’m appalled by the policies of the Netanyahu government (let alone those of its predecessors), and at the development of what has clearly become an apartheid regime.  I deeply resent being lumped together with the Netanyahus of this world — and I equally deeply resent the attempt by the Netanyahus of this world to lump themselves in with me and define my Jewishness.  How dare they?  And how dare Morsi?

I’d ask “have they no shame?” but the answer is obvious. 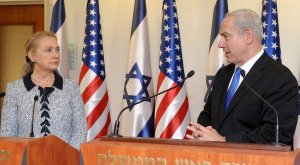 I watch as the hardliners on both sides reinforce each other — delegitimizing not Israel, nor Hamas, but the Palestinian Authority.

Worse still,  they knowingly do so at the cost of other people’s lives.

I watch in wordless misery.