Publishing a book is, in effect, going public. You spend years shut away inside four walls, and then suddenly, with publication, what was between you and your keyboard is out there for everyone to see.  You take a deep breath — a very deep breath — and cross fingers, toes, and whatever else can be crossed (mashup of religious metaphors be damned).

But what happens then can be quite wonderful. Like when I spoke a couple of weeks back at the Yale Humanist Community.  I started off more or less like this:

“Someone asked me not long ago what I thought of the huge rise in the population of nuns. The question utterly confused me, since so far as I knew, the convent population was in steep decline. He actually had to spell his question out for me: What he meant was not nuns as in sisters, but n.o.n.e.s.

It turns out that this oddly ungrammatical usage is the invention of opinion pollsters. It includes what they call “the religiously unaffiliated” and “the spiritual but not religious.” And I find it quite striking that all of these are negative terms – that is, they define people by what they are not. I mean, there’s nothing quite like insulting nearly 40% of the population by categorizing them in the negative.”

This is the point where it occurred to me ask whom I, in turn, might be insulting. “Are there any opinion pollsters here this evening?” I asked.  No hands were raised.   I wasn’t sure whether I was relieved or disappointed at that, but ramped up the point anyway:

“If you wonder why polls so often get it wrong, this might be an excellent example. Because like so much else to do with the vast and varied universe of all things shunted under the umbrella heading of ‘religion,’ it comes loaded with assumptions. And the main assumption behind the ‘none’ classification is that you ‘have’ or you ‘own’ a belief, whether religious or irreligious, theist or atheist.

I think of this as the capitalist approach to belief: belief as a possession. Or a matter of a spiritual haves and have-nots. 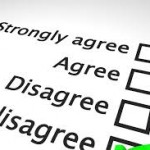 Now, pollsters believe in categories – that’s their religion – which is why they so often design their surveys in order to force the issue, leaving respondents no option but to lean this way or to lean that way. There’s rarely any room to stand up straight in pollster-land.

But what’s been happening recently is that more and more of us are refusing to go through life leaning in order to oblige the pollsters. Refusing to be categorized. Refusing to be squished under the heading of ‘religion’, whether pro or con. And totally refusing to accept being shoved ‘in between.’”

It was a great audience. Many were leaning forward in their seats, smiling, their eyes alive with interest and excitement. Like the neatly bearded guy in the check shirt five rows up, on the aisle, who was all but bouncing in his seat with excitement. He came up to me afterwards, thanked me profusely, and then said:

“I have a confession to make. You asked early on if there were any pollsters in the hall. Well, I’m not one any more, but I used to be one, and I have to tell you that you totally hit the nail on the head in everything you said about opinion polls. It was just so good to hear it said out loud.”

And so good to hear it said out loud back to me.

Why the ugly ‘debate‘ over Islamic centers and mosques may not be so bad in the long run (stress on ‘may’):

On another issue that has elicited deeply bigoted responses for years, here’s a graph from Slog, the blog of The Stranger: In other words, the more it’s discussed, the more homophobic attitudes change.

Could the same hold true for Islamophobia?  The bigots force us to organize and speak out.  They force us to pay attention, and to counter their extremist distortion of Islam, on which I will post at greater length tomorrow…