The BBC un-YouTubed it since I originally posted, so here’s a different link, courtesy of AT reader ‘whizmd’:

I love these eager, brilliant Brits shaking their heads and giggling in helpless amazement at how their calculations turn out.  Yes, it’s heady stuff.  Could mathematicians be the new theologists?

Hey,  I know time is supposed to have speeded up recently – the Web, mass connectivity, and all that.   I know everything seems to be going faster than we can keep up with.  But this fast?  Turns out we’ve gone and created our very own geological era — entirely human-made.  Goodbye, Holocene.  Welcome to what scientists now call the Anthropocene era.

The latest issue of the Royal Society’s journal ‘Philosophical Transactions’ (in Brit-speak, that ‘philosophical’ actually means mathematical, physical and engineering sciences, but please don’t ask why) is devoted entirely to this astonishing  development.  It calls the Anthropocene “a vivid expression of the degree of environmental change on planet Earth.”  Human activity, it reports, beginning with the start of the Industrial Revolution, has so altered the atmosphere that it has created a whole new geological period.

Howzat for achievement?  We’ve sped up geology.  In fact we’ve turned it into a dinosaur.  Forget waiting for millions or billions of years.  Who has the time?

Now, call me a nerd, but I love geology.  In fact anyone who’s spent any serious amount of time in the desert has to love geology.  The desert is the one place where you see the earth naked, stripped bare — no loam or trees or buildings to hide the bedrock of existence.  It’s the one place that reminds you how petty the human scale of time is – the one place you can see the span of time on an infinitely greater scale than the human, which has to be why the desert is so often a place of mystical experience. 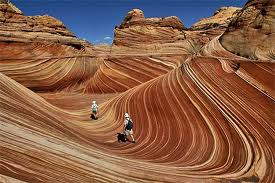 I once spent a year wandering the Sinai desert, and in that year, rock — the one thing we think most solid — became fluid.  I could stand on a rise and see the bands of different layers of rock, let my eye follow the patterns they made as they pushed up, lifted, bent, tilted, even tipped over.  In the rock, I could see billions of years:  the warp of time treating solid rock as though it were fluid, weaving and bending it with immense power.   I could actually see time, that is — see the physical manifestation of vast geological forces. 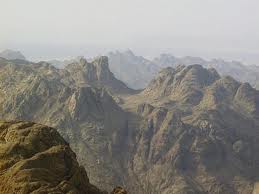 I could feel it too.  I could pick up a stone and realize that I was holding hundreds of millions and sometimes billions of years in my hand.  I could climb to the top of Mount Sinai (yes, this is Mount Sinai, on the right) and realize that I was standing on a huge piece of lava that had been thrust up through red granite from deep inside the earth, with a force so great it split the granite apart.   So the mountain forced an extraordinary realignment of my whole concept of time, human and geological.  Not much distance, you might say, between the geological and the theological.

But now I have to realign my concept of time all over again.  What we’ve done is  force geological time into the inordinately briefer span of human time;  we’ve actually compressed time, forced geological magnitude into a little over two human lifespans.