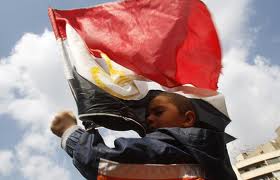 It’s hard to type through the tears.

Egypt, you did it! Egypt, I love you!

You are celebrating right now.  And so are all of us all over the world who’ve been glued to Al Jazeera‘s livestream and to protesters’ Twitter feeds for the past three weeks in stunned admiration, in anxiety and exhilaration, our hearts in our mouths, humbled by the sheer courage and determination of every single Egyptian who risked imprisonment, torture, and (for over 300 people) death.

I have no more idea than anyone else what happens from here on.  No idea if the ‘Supreme Military Council’ really does intend to hand over power to an interim civilian government.

But I do suspect that the generals may not have a choice.   Faced with such huge numbers of protesters —  even if accounts of 20 million Egyptians demonstrating in the streets today were exaggerated, even if it was “only” 10 million —  those numbers are doubling, even tripling, as people flood outside in jubilation.   In the face of such numbers, and such widespread support for genuine, total reform, I very much doubt that the military would even dare try to pull a double-cross.

All that is for the usual pundits, however.  For today, Egyptians celebrate.  And most of the world celebrates with them and for them.   Bravo Tunisia!  Bravo Egypt!  You have given notice to all dictatorial regimes — in the Middle East, and indeed worldwide.   You’ve renewed our faith in our own principles.  You have, literally, encouraged us — filled us with the courage so often lacking in our wavering liberal convictions.

Egyptians, there is only one word for what you have done:  magnificent!