More absurdity this week:  FIFA, the international governing body of football, banned the Iranian women’s soccer team from an Olympic qualifying event because the players wear hijab — Islamic headscarves.  The official reason:  safety.  Wearing a hijab while playing “could cause choking injuries.” 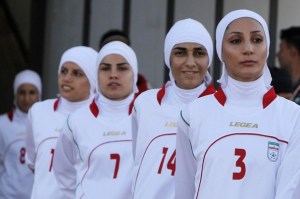 These aren’t just any hijabs, mind you.  They have to be the coolest  ones ever.  They’re like speed-skaters’ hoods, and the players look like white-clad ninjas.   I’ll bet they can move like ninjas too.   Clearly FIFA has no sense of style.

Correction:  FIFA has no sense, period.

The decision to ban the Iranian team was made by FIFA head Sepp Blatter, who’s apparently one of those Berlusconi-type men who’ll tell you how much he loves women, by which he means how much he loves looking at female flesh.  No, I’m not making assumptions.  The arrant hypocrisy of this ban is clear when you consider the fact that Blatter proposed in 2004 that women players wear plunging neckines and hot pants on the pitch to boost soccer’s popularity.  Tighter shorts, he said, would create “a more female esthetic.”

I guess it was kind of amazing he didn’t propose wet tee-shirts.

And if you believe that Blatter is for a moment concerned about women being injured, his response to requests by human rights organizations to take a stand against the sex trafficking that accompanies the arrival of the World Cup was this:  “Prostitution and trafficking of women does not fall within the sphere of responsibility of an international sports federation but in that of the authorities and the lawmakers of any given country.”

No, Blatter’s all about the sport.  He’s presumably salivating for more on-field celebrations like Brandi Chastain‘s famous shirtless moment when the U.S. won the 1999 Women’s World Cup.  And drooling over women’s sportswear catalogs instead of Victoria’s Secret ones.  In which case he’s pathetically misreading that Chastain photo.  This was the victory of hard work and muscle over frills and pretty posturing.  Serena Williams revolutionized women’s tennis in much the same way, making it a power game (in dress as well as style of play — the black catsuit she wore a couple of years back was dynamite).

What Blatter’s really doing is trying to piggyback on the burqa ban in France and the minaret ban in his native Switzerland.  But the good news is that it’s backfiring on him.  Badly.  Already the focus of multiple accusations of corruption in his 12-year tenure as FIFA president, he probably saw this as an easy way to try to redeem himself by jumping on the anti-Muslim bandwagon.  Instead, the storm of criticism might be an indication that Europeans are beginning to realize just how badly they’ve been manipulated by misogynistic xenophobes on such issues as burqa bans. 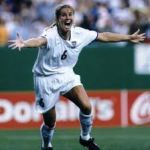 One further note on that shirtless photo:  Chastain herself was amazed when it ran worldwide .  “I wasn’t trying to make a statement;  I was just carried away, and doing what male players do in the same situation,” she told me when I met her not long after.  “I was really surprised there was so much fuss about it.  I mean, there’s a much better photo of the victory moment, but nobody ran that one.”  Here it is, on the right — the photo they didn’t run, baggy shirt, baggy pants, and all.  Which I guess just means the world is full of Blatters.

(Thank to Sarah Hashim for alerting me to this story.  I know I was born in England, but soccer’s not my thing.  Tennis, though…)