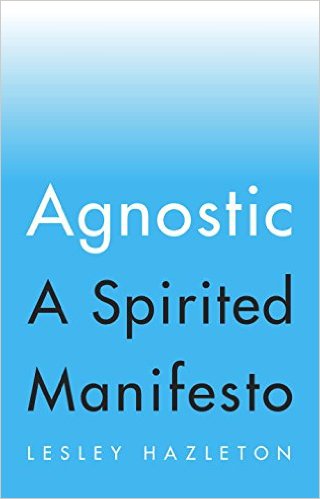 I just spent a couple of days totally absorbed in a book that celebrates ignorance.  Even better, it celebrates ignorance in science!  Or to be a tad more precise, it’s about what the author, Stuart Firestein, a Columbia University neuroscientist, calls “the exhilaration of the unknown.”

So ignore the way the cover makes the book look ominous and boring.  It’s anything but.  In fact it’s a delight.  Because of course Firestein isn’t talking about willful stupidity, that “callow indifference to facts or logic that shows itself as a stubborn devotion to uninformed opinions.”  Not that at all.  He’s talking about “a particular condition of knowledge:  the absence of fact, understanding, insight, or clarity about something.”  This he calls “knowledgeable ignorance.”  Also known as “perceptive ignorance” or “insightful ignorance.”

Essentially, Firestein’s book is a celebration of mystery.  That is, of uncertainty, doubt, and unknowability – terms which apply as much to my agnostic inquiry of religion as to his equally agnostic inquiry of science (which originally meant ‘knowledge’).   Some scientists call his approach “agnostology” – a coinage that makes me laugh out loud and imagine a bunch of angels dancing like crazy on the head of a pin.  Me, I call it accidental theology.

Knowledgeable ignorance, says Firestein, is the kind that leads you to frame better questions.  And not with any single answer in mind.  “One good question can give rise to several layers of answers,” he says.  A perfect image:  layers of answers, like layers of clouds, each one shaped and influenced by the ones above and below it, each one distinguishable and yet part of the whole most of us dismissively shorthand as “sky.”

And then this:  “Being a scientist requires having faith in uncertainty, finding pleasure in mystery, and learning to cultivate doubt.  There is no surer way to screw up an experiment than to be sure of its outcome.”

“Having faith in uncertainty” — if I believed in perfection, that would be a perfect definition of agnosticism!

An Agnostic Manifesto: Part One

For the last two weeks, I’ve been deeply engaged in what I know to be a futile pursuit.   It’s called writing:  in this case, part of the biography of Muhammad I’m working on.   Specifically, this agnostic Jew has been trying to ‘understand’ the pivotal gnostic moment of Islam – what happened the night on Mount Hira, outside Mecca, when Muhammad had his first Quranic revelation.  In other words, I’ve been trying to fathom, in words, the unfathomable, or what is beyond words.

I was fully aware that this might be a pretty good definition of the absurd, yet even so, I kept trying.  That’s an essential part, for me, of being an agnostic:  that faith in inquiry, in not acknowledging boundaries, in pushing the envelope of exploration.  This may be hubris or chutzpah (or maybe just plain dumb), but it seems to work, at least so far.

Others, though, seem to find it confusing, especially if their image of an agnostic is of someone who can’t make up her mind — someone so bullied by the loud shouts and louder certainties of those who claim to know (both theists and atheists) that she feels guilty for her uncertainty.

So let this be the first in a series of posts, over time, that I’ll call an agnostic manifesto.

For a start:  That wishy-washy hang-dog I-don’t-know-ness is not agnosticism at all.  On the contrary, agnosticism is a solid intellectual position.  I see it as a recognition of human limitation.  A position of great integrity (go on, accuse me of hubris!).  And a fine safeguard against the inhumanity of certainty.

Unless you are under the illusion that the bearded old man up on the ceiling of the Sistine Chapel is anything other than a visual metaphor, no matter how good his musculature, you really have no idea exactly what God might be.  You might have a sense of it (yes, it, not him or her – let’s stop the anthropomorphism right now), intuit it, occasionally even catch a glimpse of it.  On a mountaintop at sunset, for instance.  Or when listening to music.  Or on a psychedelic drug, or in meditation or prayer, or in the most common “oh God” moment of all, orgasm.  Any of these and more are moments of what Freud called “oceanic consciousness,” of being lifted out of your separate self into a feeling of being without boundaries, part of something greater.  Call them intimations of the divine, perhaps.

You recognize such moments as going beyond your everyday human existence, and thus think of them as metaphysical – literally beyond physics.  Beyond comprehension.  Magical.  Mysterious.

But despite all the attempts of mystics great and small, we have no language for mystery.  We’re stuck with words and images, and so words and images tend to become the thing itself, and this grand intuition of mystery, however you might conceive of it, is reduced to the dismayingly literal.

Being human, that is, we cut our sense of divinity down to size.  (Just think a moment of that small, short name in English, God.  I’ve begun to think of it as “the TLW” — the three-letter word – a disappointing shorthand, almost a pet name, that doesn’t even reverberate on the tongue as does the musical name of Allah in Arabic.)

And I refuse to do this.  The first step in that refusal is to acknowledge not just the limitations of my own knowledge, but more important, the concept of unknowability.   We’re talking (absurdly) about the untalkable, the unknowable.   That’s the mystery of it.  So I don’t say this out of any fake sense of humility or modesty.  No way:  I say it out of pleasure.  I enjoy unknowability.

Some people might think of this as a deeply religious stance, while others might see it as an utterly pragmatic one.   Me?  I feel no need to define it.  I may be engaged in a futile pursuit, but hell, it’s a splendid one.