Newly back in Seattle after an amazing couple of weeks, I’m jet-lagged, news-lagged, and above all, TED-lagged.

Eleven days ago, I was onstage at TEDGlobal in Edinburgh. The talk — on Muhammad, doubt, and the travesty of fundamentalism — may be released on TED.com as early as this coming week, but meanwhile, in the tease category, here’s a still shot: 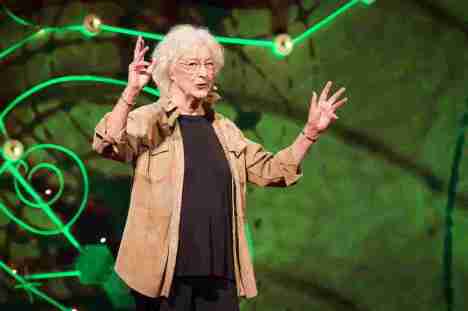 The TED audience was beyond-words wonderful.  I still can’t quite believe the generosity of their ovation. But how do you come down from such a high?

I hereby declare a new addition to the DSM-IV manual of psychiatric disorders: post-TED syndrome, which poses the patient with the problem of how to get her feet (let alone her head) firmly back to earth after a week of non-stop talk and ideas and excitement and superb company?  (Plus some great music and dancing too).

Seven days ago, I took the back-to-earth idea literally. If you had been in possession of a pair of good binoculars, you would have found me roaming the wilds of Romney Marsh in Sussex, totally wind- and rain-blown, along with thousands of sheep and the most bullish lambs I’ve ever seen — sturdy little bruisers, each with a very distinctive vocal point to make about my presence.  (On the menu that evening in nearby Rye: “Romney Marsh lamb.” My response: “Noooooo….!”)

Forward a bit, and four days ago I was doing my roaming in London, meeting my brilliant UK publishers over grappa in a club so private it has no name (British release of The First Muslim is set for November 7), doing tai-chi early mornings by the lavender field in Vauxhall Park (triple espresso at the ready), communing with the Rothkos at the Tate Modern, zipping along the Thames in water taxis, and downing elderberry lemonade and tahini-drizzled eggplant at Ottolenghi’s in Islington (his cookbook Plenty has the best recipe I’ve ever found for socca).

So today, back in my houseboat in pacific Seattle, my head is reeling from it all, and I have a new way of posing the post-TED problem: how do you get your feet back to earth when you live on a raft that floats on forty feet of water?

My TEDx Talk on the Quran: the Video

I think I’m saying some important things here that need to be much more widely known, especially at this point in time.  So if you like this talk, as the live audience clearly did — there was much more laughter than I’d expected, which is why I only just made the TEDx nine-minute limit, and the standing ovation kind of took me by (grateful) surprise — please don’t hesitate to forward it to all who you think will be, might be, or simply should be interested.

And yes indeed, I would love to hear your comments, whichever way they trend!

January 4, 2011:   Many thanks to translator Amineh Ayyad for her work on the Arabic subtitles of this talk.   The video is now also up on TED.com, where translations into more languages will soon be available.  For a transcript in English, click here.

Is Islam Really Against Satire?

An American convert to Islam issues a passive-aggressive death threat against an American icon — South Park — and presto, we have our very own Muhammad-cartoon controversy, with Comedy Central running for cover and otherwise intelligent bloggers demonstratively parading their courage with a chorus of knee-jerk “fuck you’s.”

The South Park ruse of not showing Muhammad by having him hidden in a bear suit, to emerge in the end as Santa Claus, was definitely on the gentle side of satire.  But what’s left unsaid is how un-Islamic intolerance of satire actually is.  In fact, tolerance of it is built into the Quran.

The Quran is nothing if not repetitive.  Again and again, it refers to Muhammad being mocked, sneered at, taunted, laughed at, and derided by his opponents in Mecca and Medina.  It continually cites previous messengers of God, from Abraham down to Jesus, being similarly mocked and derided.  Such mockery becomes almost an honorable tradition, a kind of inverted proof of the truth of the message.

This obsessive harping on the issue is a way of comforting Muhammad, telling him to persevere.  With the same obsessiveness, he is told to “be patient,” to ignore those who mock him, and to “turn away” from his tormentors.  Their punishment will come on the Day of Judgment, God tells him.  Punishment is God’s to wield, not Muhammad’s.

But since the Quran is as contradictory as any other religious text (the first two chapters of Genesis being a prime example), it also contains the infamous “sword verse,”  telling believers to “strike the unbelievers wherever you find them.”

If you’re a literalist, you don’t even care that there’s a historical context for this verse, which is a response to Muhammad’s followers asking if they are allowed to fight within the sanctuary of the city of Mecca.   So you ignore the qualifications — and the Quran is full of them.   Yes, you can cut off the hands of thieves, but if they repent, forgiveness is better.  Yes, you can kill Meccan opponents, but only if they try to kill you first, and only if they’ve broken an existing agreement with you, and even then forgiveness is better.   It’s as though Muhammad — or God, depending on your point of view — was searching for a way to ease the transition from traditional tribal law to the radical new post-Christian law of Islam for his seventh-century followers

Some of his twenty-first-century followers are clearly far less sophisticated, especially new converts eager to prove themselves more Roman than the Romans, as it were.  Selective and literalist reading is the modus operandi of all violent fundamentalists, whether Christian, Jewish, or Muslim.  But while we’re under no illusion that fanatical West Bank settlers represent Judaism, or doctor-killers represent Christianity, we still tend to understand Islam solely through its most ignorant proponents — and through its most conservative, humorless, and soul-less interpreters.