The one thing I really like about the Superbowl is that for a few hours on a Sunday afternoon in February, the whole urban world goes very quiet. Just about everyone else seems to be glued to the television, eating guacamole and downing beer. Since neither guacamole nor beer figure in my concept of the good things in life, I politely decline invitations to Superbowl viewing parties and instead, roam the empty streets and appreciate the silence.

And yesterday, as I indulged once more in this unwonted peacefulness, I realized that despite my seemingly un-American aversion to American football, I have lived in the United States more than half my life.

Yet you’d think that after so much time, I’d have a good handle on American folkways such as the Superbowl. I followed baseball with a passion for the first few years I was here, and a column I wrote on it for the New York Times is still probably the most reprinted piece I’ve ever written. It even became part of a Smithsonian exhibit. But whatever the opposite of a passion is, that’s what I have for American football.

A new acquaintance once tried to turn me on to the game (if “game” is the right word for a ritual in which people do their best to bash each others’ brains in, with well-documented and utterly predictable long-term results) by explaining that it was really all about real estate. If he’d known me better, he’d have tried a different tack. This was in New York, where at the time, real estate regularly made for stultifying dinner-party conversation.

More recent attempts to persuade me that it’s really a game of strategy just made me long to get back to the backgammon board or the billiard table, at both of which I acquit myself with much more gusto than skill.

Call me slow on the uptake, but this morning I finally realized that the Superbowl is about neither real estate nor strategy. As Bernie Sanders would doubtless point out, it’s about money. Big money. Which is why a considerable portion of the news coverage of the game today is devoted not to the game itself but to the commercials.

The Superbowl is really the fraternal twin of that other big-bucks rite of communal television worship, the Oscars (with the difference that in football you actually get to see black people in starring roles).  And for me, at least, it’s just about as irrelevant, which is why I’ve already turned down invitations to Oscar-viewing parties (I used to accept, only to find myself in endless complaint about the awards going to the wrong people and the wrong movies). Nothing for it but to just be un-American again, and take to the streets to commune with the silence…

Palestine and Israel at the Oscars

I’m usually no fan of the Oscars.  The “Academy” seems to have an unerring bias toward the showy and the obvious.  But this year I’m excited.  Not only because the stunningly un-showy and un-obvious Amour has a decent chance for the big Best Picture award (see my take on it here), but even more because the documentary section has two nominees that I really really want to see (yes, double really):  5 Broken Cameras, and The Gatekeepers.

The five broken cameras belong to the occupied:  Palestinian farmer Emad Burnat.  He got the first one the week his sixth son was born, and began using it as a kind of record for his children.  Over the next five years, he documented life in his village of Bilin, the focus of weekly demonstrations against the construction of Israel’s “separation barrier,” aka The Wall (another excellent documentary than never got such recognition, despite an unforgettable long opening shot of the last concrete panel being put into place, cutting off the landscape).

One by one, Burnat’s cameras were smashed — by an IDF teargas canister, by rubber bullets, by angry Jewish settlers.  Each time, he found another and went on filming, then teamed up with Israeli co-director Guy Davidi, who managed to partially fund the movie with a government grant — money, in suitably Middle Eastern irony, from the same government that broke at least two of Burnat’s cameras.  (See the trailer here.) 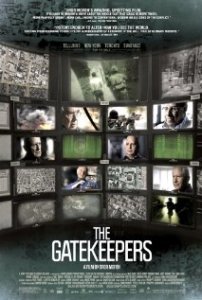 The gatekeepers are the occupiers:  six retired heads of Israel’s domestic intelligence agency, the Shin Bet (the acronym of sherutei bitahon — security services).  It’s a talking-heads movie, yes, but these six are unprecedentedly candid about their actions and decisions, including torture and targeted assassination.   Faced with the consequences of their actions as the Israeli right-wing becomes more intractable than ever, they wrestle openly with doubt and conscience, and this wrestling adds up to biting criticism of the occupation from deep within Israel’s defense establishment.  (TimeOut New York has an interesting interview with director Dror Moreh, and you can see the trailer here.)

But the Oscars are still the Oscars, where “American” wins out over “foreign” and sub-titles are considered an undue tax on the moviegoer’s mind.  So I doubt that either of these two will win the documentary award, which will probably go to Searching for Sugarman, a movie about trying to track down a Detroit singer-songwriter who dropped out of sight years ago.

And there’s a far tougher reason why neither 5 Broken Cameras nor The Gatekeepers is likely to win:  Both lead to the same place, which is the urgent need to end the Israeli occupation, and find a way for Israelis and Palestinians to coexist.  Oscar voters are doubtless terrified of taking such a basic political stand, let alone of recognizing either movie over the other and thus be seen as “taking sides.”  Politics at the Oscars?  The horror!

So in the spirit of both movies, here’s an idea:  Give a joint award for best documentary this year, Oscar voters!  5 Broken Cameras and The Gatekeepers together.  Wouldn’t that be a terrific statement?

[Note:  both movies are scheduled for general release in the US in the next few weeks.  I have no idea why the delay.]

The Rhythm of Connection 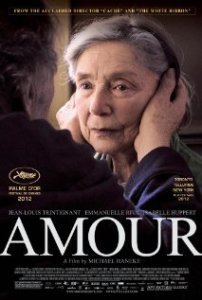 I’m still thinking about a single word from a movie I saw last month — a difficult, transcendent movie about love.  Real love.

Amour is not an easy film, and it’s certainly not for anyone who’s afraid of ageing, let alone anyone nurturing fantasies of immortality.  Written and directed by the hard-edged Michael Haneke, it’s about a loving, companiable couple in their early eighties, played by two veterans of the French new wave:  Emmanuelle Riva (Alain Resnais’ classic Hiroshima Mon Amour) and Jean-Louis Trintignant (Claude Lelouch’s A Man and a Woman).  And it’s about what happens when she has a stroke — a relatively minor one — and then another, devastating one…

I saw it at a small private screening, and thought it beautiful — quietly courageous, uncommonly real, and truly loving in a way that goes so far beyond Hollywood stereotypes as to make them hollow caricatures of humanity.  So I was quite dismayed when others there called it depressing.  It was too long, they said.  It made them uncomfortable.  It dwelled too much on the small details of life.  It took far too long it took to arrive at its inevitable denouement.

All these things were part of what made me admire the movie so.  And why I went home convinced that it would win no awards.

What a delight to be so very wrong!  Though I didn’t yet know it, Amour had already won the Palme d’Or at Cannes, and was now being talked about as the front-runner for the best foreign-film Oscar (thus the private screening copy) — talk that ramped up this past weekend when it won the Los Angeles Film Critics Award for best picture of 2012.  The Oscars might actually redeem themselves this year.

But what’s stuck with me ever since I saw the movie — and the reason I’ll see it again —  is one seemingly simple detail in the couple’s everyday life:

Whenever one does something for the other, even something as minor as putting a cup of coffee on the table or taking the empty cup to the sink, the other says “Merci.”

That’s it — a simple thank you.  Said not automatically, but not with great stress either.  Said quietly, but appreciatively. “You mean it was polite,” someone said.  But no, that was not at all what I meant.  This was far more than mere politeness (I grew up in England, so I know how shallow politeness can be):  this was courteous.  Real courtesy: an acknowledgment of the other’s existence — of the small kindnesses and fond accommodations that make up the couple’s daily life together.  It was, in a beautiful phrase I heard over the dinner table just last night, part of “the rhythm of connection.”

The word is said, in its quiet, companiable way, many times before the second stroke deprives the wife of speech.  So it hovers in the air, unsaid, when she can no longer speak.  In the end, when her husband finally brings himself to do what he knows she wants him to do, I found myself saying thank you for her.

I don’t want to act the spoiler, so I won’t spell it out for you.  Enough to say that yes, death can be a courtesy all its own.  And as it happened, I thought “Yes, that’s real love.”